New Delhi: VigyanPrasar, an autonomous institution under the Department of Science and Technology has drawn up an ambitious programme to celebrate the contributions of Indian scientists, science communicators, and teachers during India’s independence movement to mark the 75th anniversary of India’s Independence in collaboration with Council of Scientific and Industrial Research’s National Institute of Science Communication and Policy Research (CSIR-NIScPR) and science NGO, VijnanaBharati (Vibha).

The celebration is part of the Government of India’s nationwide initiative titled `SwatantrataAmritMahotsav’ to highlight a major milestone in the history of independent India, is being implemented in two phases. The first phase is getting completed by August 15 ‘21, and the second will start after that and will go on till the next Independence Day.

In the first phase, a Science Quiz Competition for the school students from class VI to XI was launched on the web portal of VidyarthiVigyanManthan (www.vvm.org.in); and posters were prepared on Indian scientists who worked during the pre-independence period and their contribution in igniting the spirit of swadeshi and nationalism in people, among other things.

The second phase will include bringing out documentaries depicting the heritage of indigenous science and technology of the past and show Britishers’ influence through policies of suppression and ignorance and how Indian scientists responded to colonial science; and holding of a national conference for science communicators and another  for academicians from school to higher education.

At a function organised online on Monday to mark the formal inauguration of the celebrations, General Secretary of RashtriyaSwayamsevakSangh, DattareyaHosabale, appreciated the efforts to showcase the contribution of Indian scientists to the independence movement. “Many scientists of the period when India was fighting for its freedom were not confined to their labs alone. They were acutely aware of what was going on outside in the country and the world. Not much is known about their contributions. It is good that they are being brought out”.

Mr. Hosabale, who was the chief guest, also emphasised that science should not be left to scientists alone since it is connected to every aspect of life and noted that spiritual stalwarts had also made immense contributions to Indian science. He recalled that Swami Vivekananda had played an important role in the setting up of the Indian Institute of Science in Bengaluru.

Union Minister for the Ministry of Science and Technology and Ministry of Earth Sciences, Dr.Jintendra Singh, who was the guest of honour, said, science not only contributed to Indian independence but also defined its various contours. “Mahatma Gandhi was a remarkable practitioner of scientific strategies. Satyagraha was nothing but a silent biological warfare against aggression.”

He emphasised the need to promote scientific temper in the country and noted that the Prime Minister, Mr. Narendra Modi, had a great scientific outlook. He recalled that at the inauguration of Shri Mata VaishnodeviKatra railway station in the Union Territory of Jammu and Kashmir, Mr. Modi had noticed that the area had a lot of sunshine and had suggested that steps be taken to try and tap it and today the station is powered by solar energy.

He stressed the importance of science and said India can become a Vishwaguru only through the medium of science. “We need to synergise all streams of science and take up subject-based research projects with the involvement of other stakeholders also”.

The function marked the release of a book called `VigyanVidushi” on women scientists and entrepreneurs from the time of Indian independence; a compilation of transcripts of talks given under a lecture series; a special edition of VigyanPrasar’s Dream 2047 on science and 75th year of Indian independence and special issues of VigyanPrasar’s newsletters in regional languages. Besides, a web portal ‘swavigyan75.in’ for providing details on all aspects of the yearlong celebrations was also launched.

The function also celebrated the 160th birth anniversary of Acharya Sir Prafulla Chandra Ray. Rich tributes were paid to the eminent chemist, educationist, historian, industrialist and philanthropist. He established the first modern Indian research school in chemistry and is regarded as the father of chemical science in India. (India Science Wire) 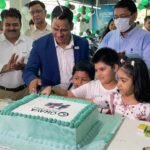